Using the Trailing Stop and Trailing Buy functionalities on Coinrule

Written by Oleg Giberstein
Updated over a week ago

What are Trailing Stops & Trailing Buys?

The price moves in your favor by $1000 to $46,450. This move will have increased your Trailing Stop limit to $46,300 – maintaining a distance of $250 from your new position. Your stop distance will continue to move up every time BTC moves up.

However, your Trailing Stop limit will never go down. This ensures that your profit is always protected. To come back to the previous example, if BTC were to start dropping, the rule would sell at $46,300, making sure you secure a profit above the price of $45,450 at which you had bought in.

If you had set up a normal stop, say at $45,400, your position would have continued to drop, ultimately leading to a loss.

Please bear in mind that trailing stops are not guaranteed to execute and can be subject to slippage. This means that they may not be executed exactly at the level you’ve specified.

Another form of a Trailing Order is a Trailing Buy. This is used to set a Buy Order for a coin that is dropping in price. Say BTC is currently at $42,000 but on a downward trajectory. A Trailing Buy set at $100 would mean that if the price reaches $42,100 your rule would buy. However, if BTC's price continues to go down, the Trailing Buy would remain $100 above the current price. If BTC were to drop to $39,000 and then go up to $39,100, the rule would trigger. You would be able to buy in at a better price.

How Trailing Orders work on Coinrule

You can set up Trailing Orders inside any condition on the Rule Page.

Let's run through some examples: 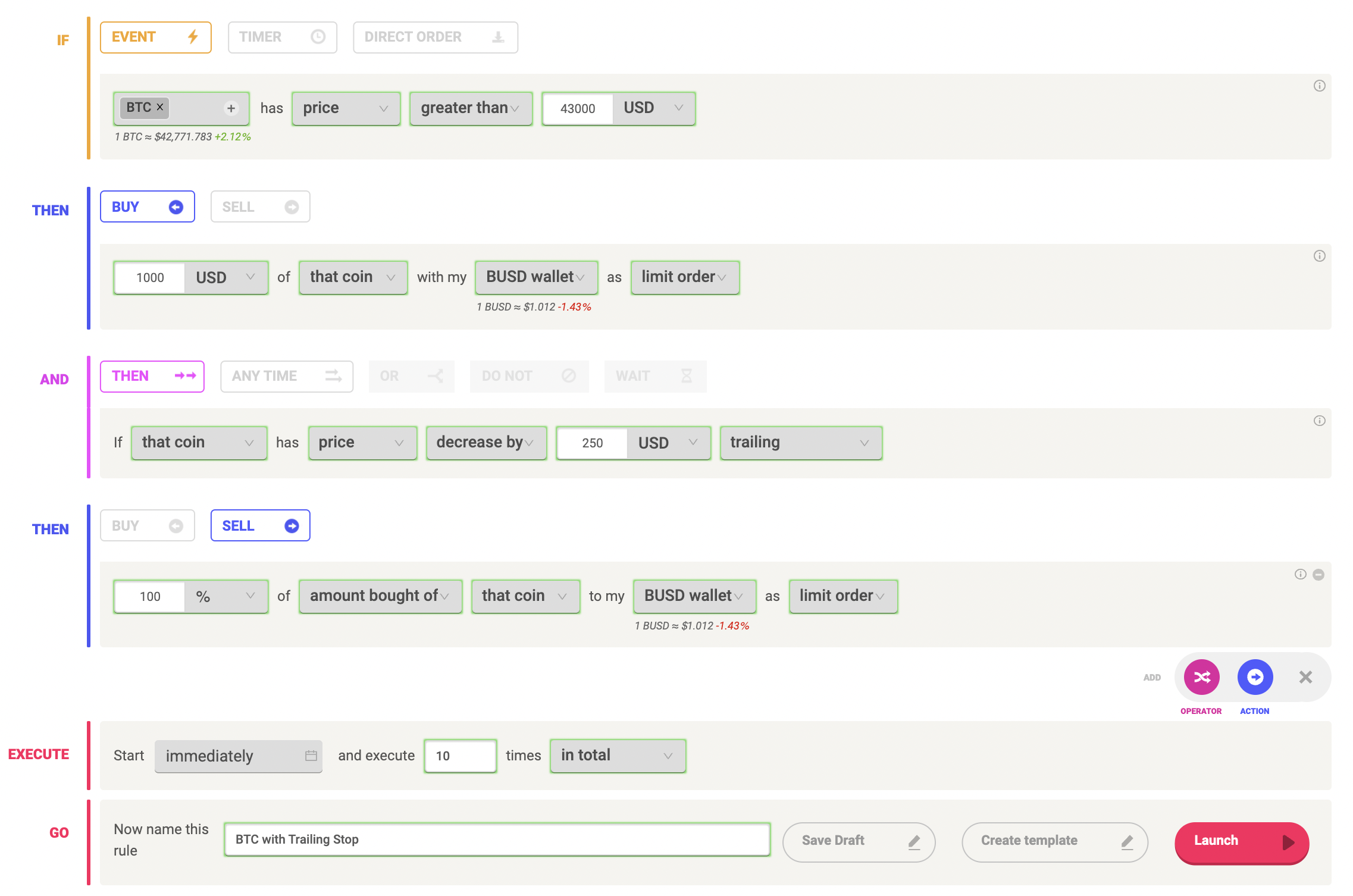 In this scenario, the Trailing Stop protects your profits. 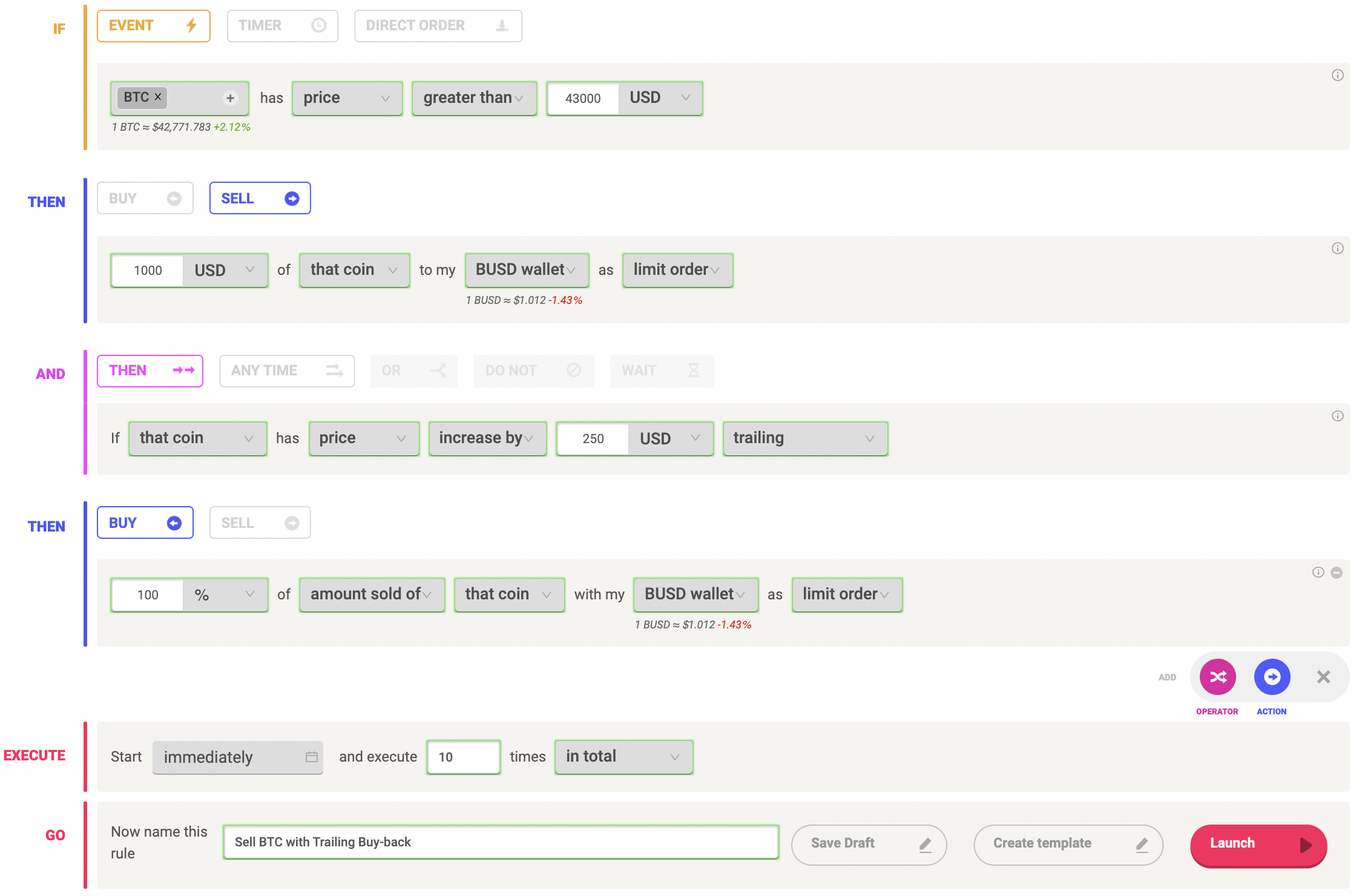 In this scenario, the Trailing Buy ensures that you buy back at a better price than with a simple Buy set a fixed price.

Certain rule structures with Trailing functionality are possible but should not be used unless you have a very specific strategy in mind.

In this case the rule would buy BTC but as exit condition it would sell with a Trailing $250 above the current price.

In this case the rule would sell BTC and try to buy back with a Trailing $250 below the current price.

Both examples above could make sense if you connect them to other indicators and triggers but if in doubt, avoid building complex strategies that may not trigger as you expect.

Example: assuming the price increases to $1,400 - this now becomes the new trailing order price. The rule triggers if the price decreases by 10% from $1,400.

Coinrule's engine will always take the highest reached trailing order price from which to calculate the trailing decrease.

For the rule to trigger, the price would now need to increase by 10% from the new Trailing Order Price of $1,150 and reach a price of $1,300 before the order triggers.

Without using the trailing functionality here, the rule would have triggered at a higher price of $1,323.

In connection with a 'trailing price increase' and a 'Buy' you can catch trend reversals with a better entry price compared to the regular 'current live price' value.