How To Use Money Flow Index (MFI)

A guide explaining the MFI indicator on Coinrule!

We have have now integrated support for the MFI (Money Flow Index) indicator, giving you even more customizability for your strategies!

The MFI is a technical oscillator that uses a combination of price and volume data in order to identify overbought or oversold coins. Similar to the RSI, the MFI oscillates between 0 and 100. However, with the MFI, coins are considered overbought when the MFI is 80 and oversold when the MFI is under 20. However, thresholds of 90 and 10 are also commonly used. When the MFI reaches these key thresholds, an asset could be primed for a trend reversal. Another important thing to look for are divergences between the indicator and price. If the MFI is rising while the price is falling or flat, it could be an indication that the price is about to appreciate. Similarly, if the MFI is falling while the price is rising or flat, it could be an indication that we are primed for a trend reversal. The MFI is often used in conjunction with the Relative Strength Index (RSI) to increase the reliability of signals. Let’s take a look at an example: 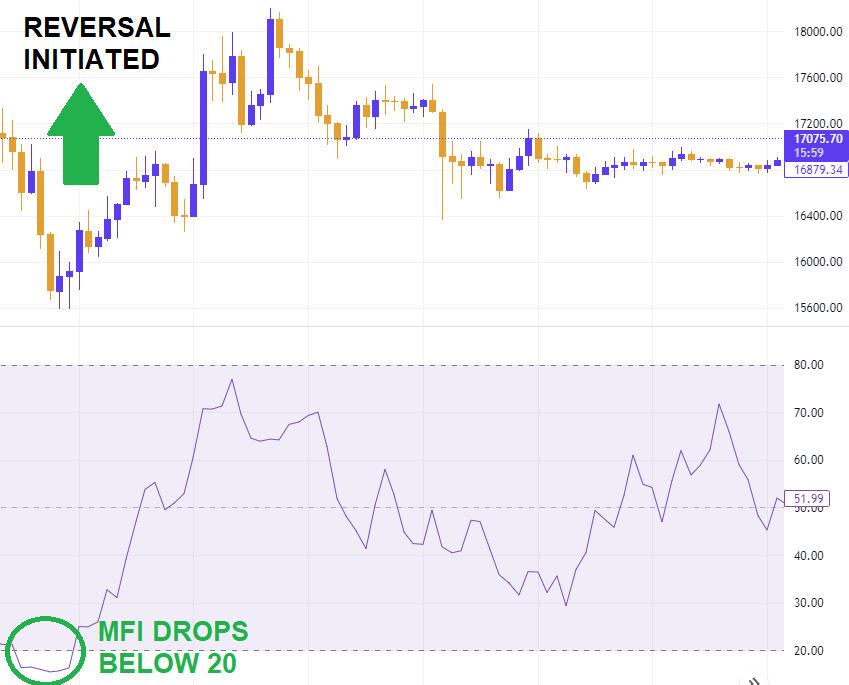 In the above example, the MFI dropping below 20 was an indication that a reversal was imminent. Once the MFI fell below 20, the reversal began and the price began to appreciate.

Below is an example strategy using MFI while trading on Coinrule:

Other prebuilt strategies using MFI can be found in our Template Library: