Sell High, Buy Low is the aim of the game when shorting. This template aims to capture tops using the RSI indicator.

Written by Mohamed Sharaf
Updated over a week ago

This template features the relative strength index (RSI) indicator that focuses on determining the buying or selling momentum of an asset. The indicator’s value oscillates between 0 and 100, with the most common range being between 30 and 70. The asset is considered oversold when it is trading below 30 and overbought over 70.

When price reaches one of these overbought or oversold areas, there is a likelihood of price reversing with buyers stepping in when the asset is oversold. This is due to the price having trended down the majority of the time during the previous 14 periods and potentially reaching an area of relative value as sellers are exhausted and price is no longer attractive for them to continue selling.

Conversely, sellers will step in when price reaches the overbought region as there has been substantial buying pressure over the past 14 periods with buyers potentially being exhausted and slowing down their buys with the expectation there will be a retracement where they can buy lower. This principle enables the RSI indicator to provide a potential indication of where a reversal may take place - leading to a good opportunity to buy or sell. 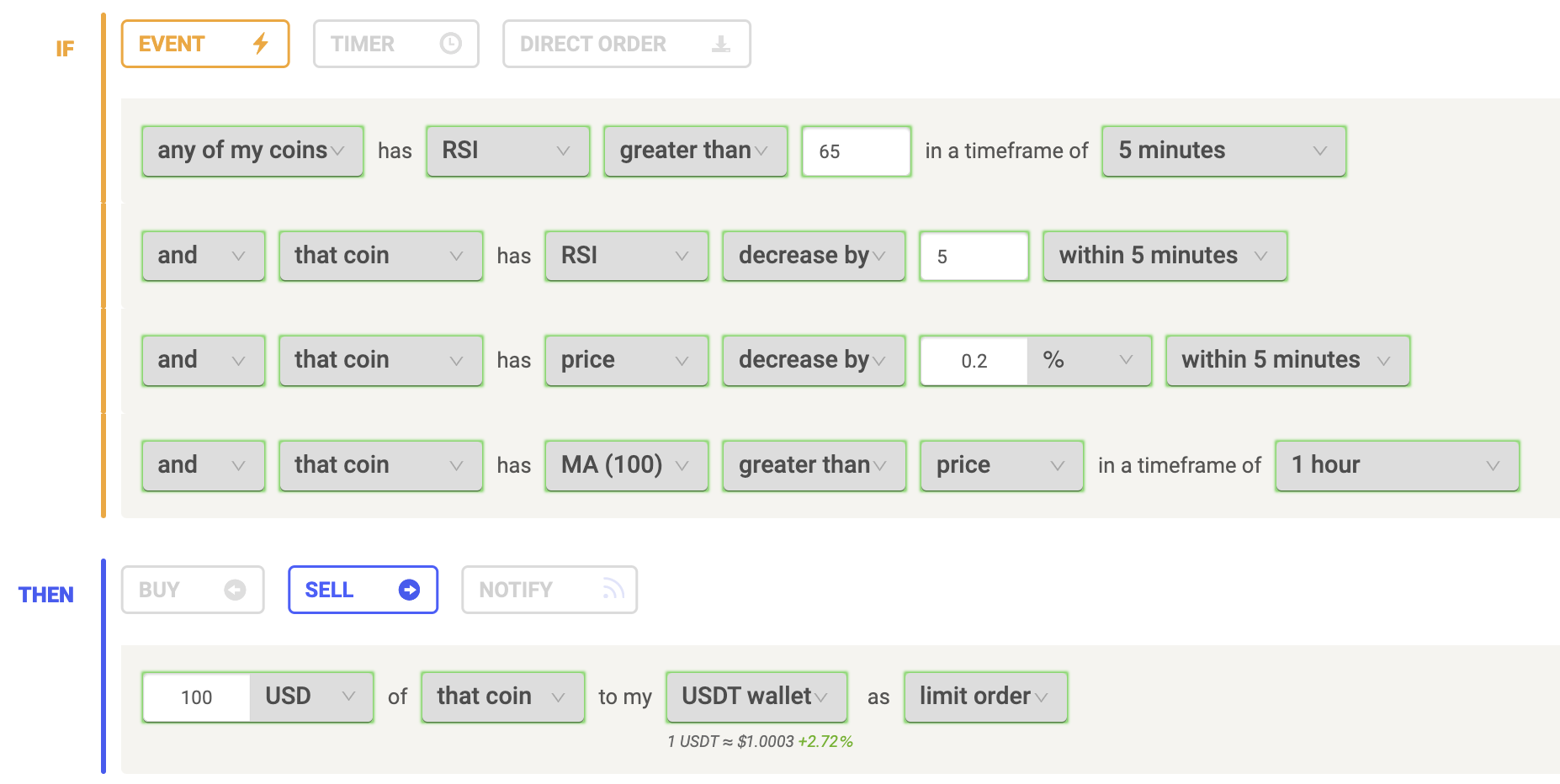 In this strategy, we focus on short selling, the process of selling and buying back lower. Therefore, we want to be selling when RSI reaches levels that are overbought to increase our chances of selling in an area of significant supply.

The first condition will be met when the asset has an RSI of greater than 65, and is around the overbought region, in a 5-minute timeframe.

The next condition to be met is if RSI decreases by 5 within 5 minutes, this will result in the coin having to have been at least over 70 and dropped by 5 with RSI still above 65. This will indicate that the coin’s price has reached a peak and encountered some selling pressure.

To further confirm this, the third condition of price decreasing by 0.2% within 5 minutes has been added to provide additional confluence that the downtrend has occurred and the coin is no longer increasing in price, suggesting a reversal has begun as price has been rejected from an area of supply.

Finally, the asset will have to be trading under the moving average 100 in a 1-hour timeframe, showcasing there is some weakness with the price unable to get above this moving average. This prevents the strategy from buying when the coin is in an uptrend and prevents potential losses.

To prevent being stuck in a losing trade and experiencing extended downside, a 2% stop-loss has been used which will trigger when price increases by 2% from the entry price. With the minimum profit per trade being 1% and the maximum loss being 2%, this template has a minimum risk reward ratio of 0.5. This results in the strategy having to win more than 66.6% of trades to be profitable if all winning trades are only 1%.

Due to the flexibility of the trailing stop, the average profit of the rule will most likely be greater, enabling additional security in the strategy not having to be profitable for the majority of trades.

Try out the RSI Top Scalper now and trade safely!