How To Calculate Profit On Coinrule

A guide to how Coinrule calculates your profit

Written by Tolulope Adekojo
Updated over a week ago

Making a profit is at the center of trading, so it is important to understand how profit and loss are calculated in Coinrule fully.

Traders need to identify and measure the profitability of their strategies.

Coinrule shows the actual performance of your rules and what it adds to your holdings; hence, the net profit on the dashboard is the total profit of all the rules run on the account.

However, once a rule is deleted or completed, it seizes to be considered in the net profit. It is important to keep in mind that profit calculation is not considered in demo rules. The net profit on the dashboard counts active rule, plus paused rules and rules you have been running in the past.

Possible Differences between Profit and Loss on Coinrule and Exchanges

Coinrule doesn't consider the manually sold coins when calculating profit and loss when Trades are performed manually on the exchange.

That implies that the P&L is calculated on Coinrule as though the manual trade never happened.

If 1 ETH is sold at $500, and the current price is $450. If the trader repurchases the coin manually at $450, the trader has profited by $50. However, that will not reflect the Coinrule net profit should the price change because the sale was made manually.

As a rule of thumb, any trade that happens outside of a rule is not considered. Every rule considers its actions to give a good overview of what value a rule can specifically add to the wallet.

Also, the profit doesn't consider the trading fees shown separately on the activity page, thereby giving you the accurate value of your holdings.

The profit of each rule takes into account the performance of all trades the rule executes, both open and closed.

Rules can open multiple trades at the same time. Therefore, to calculate the P&L of a rule, the system considers both closed and open trades. To do that, Coinrule uses the concept of realised and unrealised profit when calculating the P&L of a rule.

An unrealised profit or loss refers to trades that are still open, for example, coins bought and not sold or vice versa. It uses the current market price of that coin relative to the entry price as a reference. As the price of an asset fluctuates, the unrealised profit can change over time until the trade is closed. Therefore, your profits will not be secured (realised) until you close the trade and sell the coins you have purchased.

The following day the current market price drops to $550, so the P&L will decrease by $50, resulting in the unrealised P&L of the trade being $50.

Instead, a realised profit or loss refers to complete trades where the coins have been sold. Here the calculation compares the exit with the entry price. Thus, the realised P&L does not fluctuate as it illustrates the performance of each closed trade.

Movements in price do not affect the realised P&L as you have sold the coins and closed the trade. That secures your profits and enables you to re-invest the capital in other trades. In addition, if you realise your profits into stablecoins, such as USDT, DAI, or USDC, you will not be exposed to volatility and any price movements. That is due to the price of these assets not fluctuating and changing.

After one day, the current market price is $600, and you sell at that price and realise this gain. The realised P&L will show a profit of $100.

The following day the current market price for 1 ETH decreases to $550, but you sold all the coins, so the P&L is still $100.

Each rule's activity log page provides all the helpful info about realised and unrealised across all the traded coins you may need.

You will have a breakdown of the P&L per single coin, so you have a better overview of the performance of the rule.

This view also allows you to quickly check the already closed trades and those still open on the market.

Note: in some cases, the amount bought and sold may not match. That usually happens because the exchange charge the fee with the traded coin, so you have less to sell after. On top of that, there is a round lot to comply with. When the system rounds the trade amount to allow the trade to go through, you are left with a small residual amount in the wallet.

If you need customised calculations for your analysis, you can also export the list of trades using the top right option.

Profit and Loss on the Dashboard

Rules Profit is the net sum of the P&L across all active rules at that moment.

Total Growth equals the Rules Profit divided by the value of all the wallets you have connected to Coinrule via API.

In the example below, the Total Growth equals 15% because the total balance of the exchanges connected to Coinrule is around $81,00. 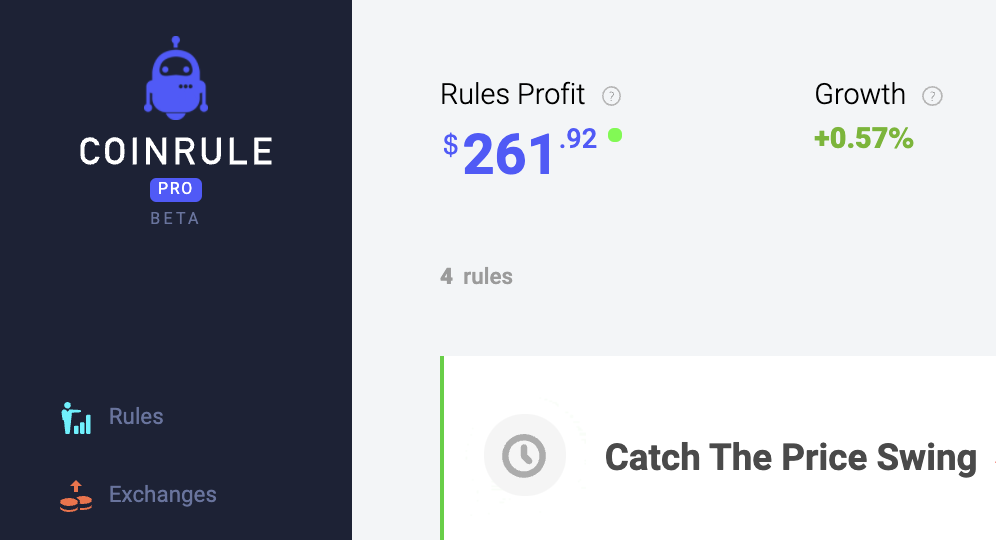